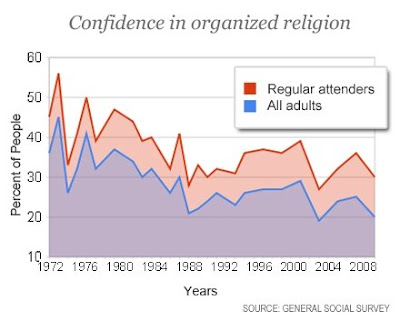 Mark Chaves at Duke blogs that

"Between 1973 and 2008, the number of people with a great deal of confidence in religious leaders declined from about 35 to under 25 percent. Higher percentages of regular church attendees express a great deal of confidence in religious leaders, but the trend is the same. It is difficult to know which leaders of which religious organizations people are thinking about when they answer this question (local leaders? national leaders?), but if you lead a religious organization you probably will find this a disturbing trend under any interpretation."

We're in a time period where almost all institutions and leaders seem to be fighting long odds in terms of public favor. Does anybody believe in anything anymore? Do we have confience in any organization or leader? What might help Easter occur in the everyday life of a denomination and especially in how they are viewed by the world?

My guess is it won't be a PR campaign, but most likely a local emphasis where people see something in the Church which expresses the Kingdom of God. Maybe we all need to get a community of faith focus on how to express this reality TODAY.

"Everyone was amazed by the many miracles and wonders that the apostles worked. All the Lord's followers often met together, and they shared everything they had. They would sell their property and possessions and give the money to whoever needed it. Day after day they met together in the temple. They broke bread together in different homes and shared their food happily and freely, while praising God. Everyone liked them, and each day the Lord added to their group others who were being saved." Acts 2:43-47 CEV

Declining Confidence
Posted by revscottep at 7:03 AM