Rev. Nick Elliott gave me permission to share this as the intent is to "get the word out" on the best ways to be a help in Haiti. You'll read in this MANY opportunities for assistance AND limited opportunities for teams to go in. I'll be part of a mission leadership team from North GA meeting this Saturday to get a first hand account regarding Haiti and how we might best be part of the long term recovery.

Rev. Tony Rowell (Chair of UMVIM, SC), Mr. Wade McGuinn (Director, Haiti Children's Project), and myself formed a delegation from South Carolina to visit Haiti with Mr. James Gulley, the UMCOR Coordinator for Haiti on February 20. We were joined by James' son and daughter in law, an independent writer and photographer team. Our pilot was Brett Meares who also spent his time shuttling food into Haiti from the Dominican Republic while we were busy in Haiti.

As we circled the Port au Prince Airport, we could see the devastation from the air. We were met at the airport by Donnette and other staff from the Methodist Guest House. The drive was quiet sobering. Later on as we toured the city and looked at the devastation, several things became obvious. The amount of damage was far greater than can be understood from watching the news media coverage; the danger from falling buildings is still present; there is without doubt many people that are still missing and presumed to be under all the rubble; and everyone we met was still in shock.

We visited the ruins of the Montana Hotel with a respective silence. This is where James Gulley, Clint Rabb and Sam Dixon from the GBGM were meeting. As they were walking from the lobby to the dining room the earthquake hit. Jim said “in a matter of three seconds we felt the earth shake and then we were covered in debris.” They were in a small space about 4' by 8' injured but alive. Although they thought they could hear searchers looking for them, they could not get their attention. It was over fifty-five hours until they were rescued and by that time, Sam Dixon had gone to meet his maker. Clint was rescued but badly injured and soon went on to meet with Sam and their Lord. Thankfully, Jim only sustained minor injuries.

These types of stories can be told repeatedly. People going about their daily tasks with the assumption that everything is business as normal and within the blink of an eye—everything changes. Haiti is the poorest country in the Western Hemisphere and in the very best of times, life is extremely difficult. The list of why Haiti is so poor is too long to mention but a primary reason is the lack of a sufficient government infrastructure. It was this same lack of infrastructure that caused many deaths due to the lack of adequate building codes.

The projection of lives lost is 250,000 and 300,000 injured and 1,500,000 displaced. Many refugees have gone to different cities throughout the country and others are living in tent cities. For example, on the Methodist Guest House compound there is a double set of concrete basketball courts filled with tents and five hundred people living there. As you can imagine, food and sanitation are main concerns; as well as sufficient health care.

The school at the Guest House compound is sitting idle due to safety concerns of the buildings; and the shops and trade schools do not have sufficient funds for operation. There is only minor damage at the Guest House and this is primarily the collapse of security walls around the house. To compound difficulties, the Guest House is a source of income for the Methodist Conference and so are the schools, but the earthquake brought a stop to this income.

On Monday, February 22, we met with President Gestner Paul. The schools and the Guest House are priority for the Conference. The guest house will serve as the center of operations in the Recovery Phase and the schools' tuition pay the great majority of salaries for the Pastors of the Conference.
The first school we visited was College Bird. It was a school with 1850 students and thankfully no one was injured during the earthquake because school had finished and everyone left for the day. Even the custodian had just left when something told him he should wait until the next morning to mop the final classroom. The church was still standing but the Bell Tower was cracked and leaning which makes it impossible for the church to be used. The rest of the buildings had collapsed and were being cleaned up with hand tools and workers (a mammoth job.) This is President Paul's first priority but I question when it will be cleared.

An Associated Press article February 26, 2010 quoted Haitian President Rene Preval as saying it would take 1000 dump trucks 1000 days to to clear all the debris from Port-au-Prince. It also said they only have 250 dump trucks owned by the government and maybe another 250 from the private sector. This will definitely have an impact on Haitian Methodist President Gestner Paul's plan for the College Bird School to be ready for construction by mid-March.

The Haitian infrastructure will continue to face more challenges as the government attempts to move displaced persons to the outlying areas beyond Port-au-Prince. The government does not like the idea of large tent cities but the Haitians are reluctant to move again after finding a suitable tent city. However, with the impending rainy season, sanitation and malaria are primary concerns. There is a small tent city in the yard of the Prime Minister and nearby the symbol of oppression (the Presidential Palace) was destroyed by the earthquake.

The second project we visited was the Carrafour School and Church. There was very little damage to either and they can be used as soon as a government inspector approves use. There is a real problem with getting persons to return to their homes, churches, schools, etc. Simply, everyone is so afraid of another earthquake that they do not want to be inside a building. They know the loss of life during the January 12 earthquake and simply do not desire to be a casualty if/when it happens again. This was evident even with our team. We experience aftershock the night we arrived and the second night some of our team slept in tents. I might add the rest of our team joined them when an aftershock hit about 1:30 am the second night.

We followed the western seaside highway out of Port-au-Prince to Melliere. There we found a school and a church that would be a great project for six or seven UMVIM teams. It is in a sugar cane field and teams would probably stay in the Guest House in Petit Goave.

We then followed the seaside highway to Petit Goave which is seventy-five miles out of Port-au-Prince. You can easily see the fault-line due to the cracks and holes in the asphalt highway. The damage in Petit Goave was nearly as bad as in P-a-P. The school had some moderate damage, mainly cleaning debris. The Methodist clinic was demolished and a nurse from Texas was a casualty. There was minor damage to the Church but the auxiliary buildings sustained major damage.

The top three Priorities for Haiti Methodist President Gestner Paul are:
1. College Bird School
2. Update and repair the Guest Homes
3. Life with Dignity for the HaitianPeople

The Haitian Methodist Conference was last week and most likely the Conference endorsed President Paul's priority list. UMCOR's Tom Hazelwood and three of the five UMVIM Jurisdiction Coordinators attended to gather the latest information. Please remember according to the Discipline, UMCOR is in charge of all disasters and all United Methodist Agencies are to work under the direction of the Haiti Conference.

PRESIDENT GESTNER PAUL WANTS ALL THE TEAMS WORKING IN THE DISASTER AREA TO WAIT UNTIL AN INVITATION IS ISSUED. HOWEVER, IF YOU ARE WORKING OUTSIDE OF THE DISASTER AREA, YOU CAN SERVE AT THE DISCRETATION OF THE CIRCUIT SUPERINTENDENT.

There will probably be someone selected and stationed in P-a-P to coordinate teams coming to Haiti.

Wade McGuinn will be checking the plans, material lists, and labor costs for the Church. (A Special thank you to Wade for arranging the private air flight.)

The Haiti School Lunch Program should be pushed and expanded. For $1.00 a day a Haitian child can receive enough nutritious food to thrive. To put it in perspective, I saw a TV commercial asking for $19 a month to “help save the animals.” Which is the most important children or animals?

Health kits, midwife kits, layette kits, scholarships and gifts which preserve the dignity of those receiving assistance are still needed!

Upon the return of Tom Hazelwood and the Jurisdiction UMVIM Coordinators, we will have a much better idea of how and when we can begin our response.

We in UMVIM, SC are called to be servants to our Lord and Savior as we serve with the Haitian Methodist Church. True servants are not concerned about logos or egos but only a heart to serve.

I know in my heart, the Haitians stand a good chance to be better off than before; if, we as Christians use our love and resources to help them recover. The Haitian People are some of the most loving and resilient people God ever created and they have hope for the future. I am reminded of a Haiti Proverb from the Haitian book GOD IS NO STRANGER.

Photo by Rev. Tony Rowell for use only to raise awareness of the Haitian situation. 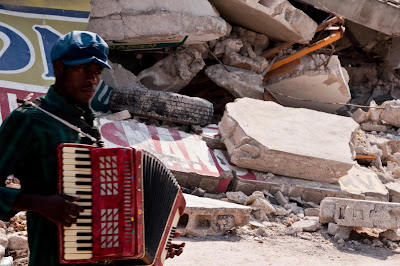 Lord your servant
doesn't know
left from right.
Even now I don't
know which one of
your Hands I am in
--but if in the
left or the right
it doesn't matter.
I am in Your hands
and that's enough.