A week ago I spent some time Saturday morning with the Bon Air breakfast ministry team. They are a faithful group who provide breakfast every Saturday morning for 75-100 people who live in the Bon Air Apartments in Augusta. The Bon Air is located on Walton Way, at the big curve as you ascend the hill from downtow, just across from the Partridge Inn. The Bon Air Hotel opened in 1889, and at some point was also known as The Vanderbilt.

Postcard image, circa 1900, showing the unique Victorian Gothic architecture of the Bon Air Hotel in Summerville, Georgia. Originally built with 105 rooms in 1889, the Bon Air Hotel was the first of three resort-style hotels to be built in Summerville around the turn of the century. The Bon Air Hotel featured an electric Otis elevator, electric lighting, steam heat, lavish dining rooms, parlors, billiard rooms, and reading rooms; it also provided guests with amenities such as golfing and horseback riding. Due to the hotel's tremendous popularity, an additional 145 rooms were added in the early 1900s. The Bon Air Hotel was destroyed in a fire on February 3, 1921. 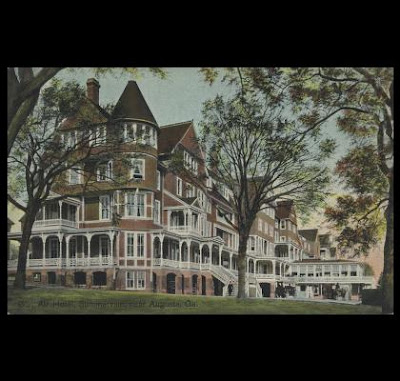 The hotel was quickly rebuilt by 1923, and continued to draw many travelers. This was in the day when Augusta was a destination town on the railroad. Summerville, the "Hill" area, was The Bon Air was rebuilt and functioned for many years as a hotel until 1964 when it became a retirement home. 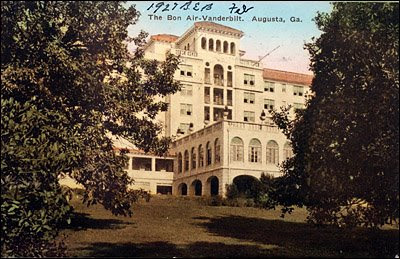 Years pass, the inner city overtakes the vacation destinations of years gone by. The Bon Air is now a residence for the elderly, special needs adults, and individuals and families on the edge of being able to have housing. So, our faithful team serves breakfast every Saturday morning promptly at 9:30 AM.

Last week I met a young woman who was quilting. I was very curious what she was doing. It turns out she and a few other residents of the Bon Air meet once a month, and continue their work throughout each month, making quilts for a nursing home and for children at the nearby Medical College of Georgia.

That turns everything around doesn't it? Those I would call needy doing what they can to care for others.

I'm collecting fabric pieces, thread, and needles for these women to encourage their good work. I'm also hopeful a few of our quilters from the church might join the effort as this ministry within a ministry develops in a place the Rockefellers and Vanderbilts once enjoyed.

Posted by revscottep at 7:05 AM