I have just returned from an incredible adventure in Kenya as I experienced the United Methodist Church, and some of the larger Wesleyan family and east African context, there from August 6-16, 2015. It’s an amazing thing to leave the United States, take a 7 ½ hour red-eye flight to Amsterdam, have a few hours layover in Europe, then take an 8 ½ hour flight to Nairobi. So, in less than 24 hours the traveler from Atlanta arrives at 8pm Kenya time after the flight through 7 time zones and touching 3 continents.

That first night was spent at the Methodist Guest House in Nairobi with the Friday drive to Meru with Mount Kenya and the mountain range in view. Rev. Gatobu Mathamia picked me up at the airport. Yes, I couldn’t say his name either! I didn’t know him, nor had his photo, and vice versa. But we eventually found each other and had a good trip on Friday as we got to know each other, I fought jetlag while asking many questions, and ate some great food along the way while also getting an immersion into Kenya traffic and driving. He also told me about his name. I think I’ve got this order correct (did I mention I was jet-lagged & Gatobu has a thicker accent- like me- so that it took us some time to get into synch?!). Gatobu told a story of his birth and that his grandfather, a shepherd with a large mixed herd of livestock, was taking care of the animals in the afternoon that Gatobu was born. Gatobu means “shepherd” in his original language. Muthamia recalls the time when the grandfather's family were migrating from one location to another and beckons to the family name. Of course, now as a pastor, Gatobu says he will bring many into the fold and into a new place.

I greatly enjoyed my Friday-Sunday in Meru, about 6 hours northeast of Nairobi, joining the concluding days of a World Methodist Evangelism Institute emphasis on evangelism held at Kenya Methodist University. I’ve heard of their work from years, but have known it more from a US perspective. What an amazing experience to join the United Methodist, Methodist Church of Kenya, Nazarenes, Salvation Army, and Free Methodists who had gathered from Kenya and the region. The sessions included large group lectures, small group seminars, and 2 outdoor crusades at the nearby town crossroad. We also experienced an overnight stay with a church family and preaching at their church.

While at the WMEI training I learned from a “lost boy” of southern Sudan who lost all of his family, but is now a married adult living in Kenya and pastoring a UMC church. I heard from a pastor who lives in Somalia and serves the underground church there. I learned much about the difference between the MCK, a 100 year old church out of the British Methodist tradition, and the much younger and under resourced UMC which is only 15 years old. It was said that while 80% in Kenya say they are Christian that often that is in name only. There was a lot of discussion about the church moving from being a colonial structure and approach to being more indigenous and contextually effective. Much of the discussion was on a mix of big event and relational evangelism which would reach people and create a momentum.  There was rich discussion about Kenya becoming a mission sending country not only to reach their own country well, but to also reach the region, and Africa, and the east African diaspora around the world. I heard stories of a church on the move as IDP’s, Internally Displaced Persons, have been key to some of the growth of the church in Kenya and east Africa. I learned much about the outreach and effectiveness of the UMC in establishing churches in the slums and toughest places.

The WMEI training was important in the information and practices which it shared and reinforced with expectation that clergy will teach and model in their church and community in ways which will help laity and other church leaders in a region to continue sharing their witness in contextually powerful ways. I heard repeatedly that a great impact of this historic event was bringing the Wesleyan family together. Typically they operate separately, are often in competition, and at times even adversarial in their approaches. This gathering reinforced that they are all part of one family and gave plentiful opportunity to interact and know and appreciate one another. Further, there was exploration of ways they might blend their voices together for greater impact. Certainly the shared work in music, testimony, and preaching for the outdoor crusade on Saturday and Sunday afternoons reinforced the potential to work together in reaching a community.

Some of this experience in conversation and relationships also exposed the huge contrast between an established century old church with strong structures, funding, and leadership education with the young UMC congregations which have experienced 15 years of tough beginnings, 2 episcopal leaders with significant problems which have isolated the conference from the larger UMC (here's the most recent info on the situation with Bishop Wandabula), and the challenges in general of developing a UMC conference across 6 countries. UMC pastors aren’t paid by the church, typically work one or more jobs, have limited education and training in church ministry, and have many challenges related to daily life. In Kenya UMC alone they have 12 districts, 113 UMC congregations, and only own 5 buildings as it is necessary to rent. Even during the weekend of the WMEI event, one of the UMC churches was kicked out of their rental unit on Saturday afternoon just prior to a visiting preacher and crowd expected on Sunday morning! Imagine having to call all of your congregation with the bad news, struggling to find a location for Sunday, and then needing to call everyone again about the new location. Or consider being the preacher hanging out at a coffee shop on Sunday morning waiting to hear the location where the church will gather and you will preach!

I spent Saturday night in the home of Isaac and his family. Think of a modest, well kept, cinder block home of a government worker in community development with two older teens who are interested in pursuing careers in medicine and two younger children away at a strong elementary school and you may have the idea. It was a powerful contrast to cross the street on Sunday morning and visit with Isaac’s elderly parents who live on a farm and live in an older style compound that seems typical in Kenya and much of Africa. I preached at Mathangane MKC on Sunday morning where Isaac is chairman of the board. They had almost 80 children in the Sunday School and around 200 in worship. We enjoyed some of the milk tea prior to worship, started worship around 10:15am, and concluded a little after 1pm. While the clergy and worship leaders slipped off into a room for lunch the laity continued meeting on some matters of interest and importance. 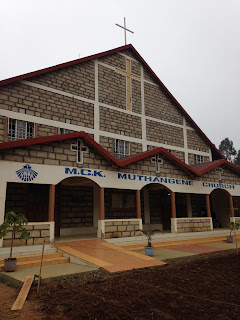 Now, this WMEI experience was strong in information and conversation, but the actual practice of having an outdoor crusade was powerful. Imagine the setting at a crossroads with all of the traffic, with marketplace and stalls lining the streets, with many people walking and riding and passing through. Now think of an outdoor worship that has intention of getting your attention, causing you to stop and check it out, and inviting your notice and participation. Think of outdoor crusade as spectacle and invitation. Think of music that invites you to join in with the singing and dancing. This is worship in the pubic square which expresses power and transformation. Visualize prayer and healing for the people of the community and for yourself. This is also a chance to make visible claims in the center of the village about who you are and the God you serve. 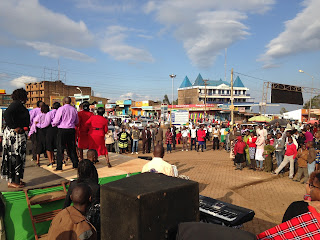 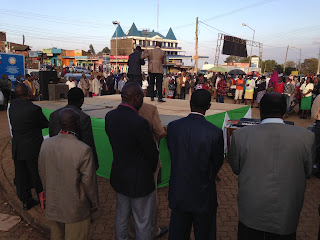 This is just a quick snapshot of my Friday-Sunday (August 7-9) experience in Kenya!
Posted by revscottep at 8:35 AM